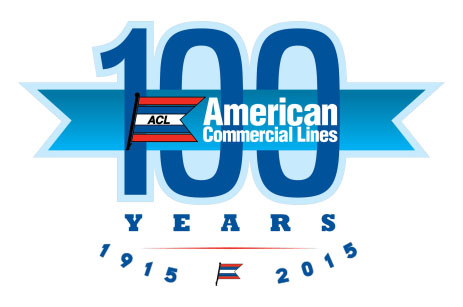 American Commercial Lines (ACL) has been moving customers' cargo on the inland waterways since 1915, since the beginning of transporting coal on the Kentucky River. Since, they have grown into one of the largest and most diversified marine transportation services companies in the nation. With a fleet of approximately 2,300 barges, powered by over 100 towboats, ACL is the nation's second-largest liquid cargo barge line and the third-largest dry cargo barge line.

Headquartered in Jeffersonville, IN, ACL has over 2,200 employees, and their Transportation Services unit operates fleets and terminals throughout the inland waterways network. Their manufacturing division, Jeffboat, is located on the Ohio River right in Jeffersonville.

ACL was purchased by Platinum Equity, a global acquisition firm headquartered in Los Angeles that specializes in mergers, acquisitions, and operations of companies that provide mission-critical products, services, and solutions in diverse industries. With the extensive resources and operational expertise of Platinum Equity, ACL was now able to focus on process improvement.

With the Process Improvement goal established, employees began searching for training and development solutions to help them learn how to quantify process improvements which would lead to real savings for the company.  Although Jeffboat was utilizing lean/six sigma techniques on the manufacturing floor, many of these concepts were new in the administrative setting.  Through several conversations with Purdue MEP, Adam Auffart determined that ACL would benefit from providing Lean/Six Sigma Greenbelt and Blackbelt training to employees to ensure a smooth implementation company-wide.

Six Sigma Greenbelt and Blackbelt training concluded in December 2014, allowing ACL a much smoother implementation of Lean, as well as buy-in company-wide. This partnership with Purdue MEP led to several projects, including one involving an assessment of their mainline vessels.  This project, taking into account the number of boats operating, then systematically analyzed the staffing needs based on the type of cargo in tow and river segment.  Sounds simple enough, but as many as 5 departments are involved in recruiting, hiring, training, staffing, and managing these employees before they ever step foot on the boat.   The Six Sigma project helped ACL's teams proactively identify the most efficient number of teammates needed to keep the boats in operation.  The savings from this project were measured by downtime, now completely eliminated, which runs into thousands of dollars per hour.

“The instruction we received from Purdue MEP was excellent, and (our instructor) was able to relate Six Sigma concepts in practical, everyday experiences.  He also made himself available between classes to coach us on our individual and team projects.  I hope Purdue MEP can return to help our teammates who were unable to attend this session.”